Google is one of the companies that in addition to giving one of the best supports to the client. and that is not surprising since we see it in every update that launches for Android versions and especially the one that launches Nexus devices, which are the first to be updated. The set of all this and the performance that gives all software made by Google, including Google Maps gives us an almost excellent user experience in all aspects, and the best thing is that they never give up trying to make the day to day easier for the user.

Google is a fairly large company that has several applications, and one of them is Google Maps, which is intended for GPS navigation. This application has been on the market for several years, and is probably one of the most useful for the average user, since not everyone can reach anywhere by car, on foot or by public transport. Its operation is simple, you are looking for a destination, a starting point and it will tell you how soon and where to go, but what is behind all this? We’ll tell you then.

How does Google Maps know the traffic there?

One of the most useful features of Google Maps and at the same time more curious is that it knows the traffic that we will find when we go by car. But how does Google know this? The answer to this is that Google is based to measure traffic in two types of information, the first is that it makes a historical record every day averaging how long it takes to get from one site to another depending on the time and day.

The second source of information is our smartphones, since our mobile is constantly sending reports about where we are, and how long it takes to get from one place to another. When turning on our smartphone, the GPS starts sending anonymous packages of our location and the speed at which we move.

And before smartphones, how did you predict traffic?

Does the Google Maps application spend many megabytes?

This is a question that many people have, and it can be a strong reason for some people not to use this application. Many people do not have a lot of data in their mobile rate, and are afraid of wasting that data in just knowing how to get to a site. Now Google Maps has a function to download the map and use it offline only with GPS, but how much do you really spend on data? The answer is simple, very few. In many statistics, we can see how in trips of 300 to 500km, the Google Maps app can spend between 60 and 80 megabytes, a nonsense compared to the kilometers traveled.

The maps we see are not made by Google

Google can take the credit for many things, but to make the maps in which we navigate is not one of them. These maps are created by a private company with which Google has an agreement. This company is called Tele Atlas and they are the world leaders in location and navigation services. Thanks to this company we can see some maps with such precision, and most importantly, there are maps of even the most hidden part of the world.

How does Google earn money with Google Maps?

Surely Google has many services for which you do not receive any money. It has a large catalog of applications such as Google Keep or Google Calendar that does not generate any benefit, but, although we believe that it does not, it does receive money through Google Maps. Many establishments pay Google to add their site to the Google search algorithm, to be more visited. For example, we can see how in a busy site, if we zoom the map, the first establishments that appear on the map are those that have paid Google for it.

Another way to make money with this application is Google Maps API for work. It is the same application only that focused on business, with customized maps, a little more precise, higher resolution when viewing the map and the possibility of having support instantly.

We hope that we have solved some of the doubts that you had about the application of Google maps, or you have found interesting the curiosities that we have told you. You can never expect the big job behind an application, especially if it’s from a company as big as Google 🙂 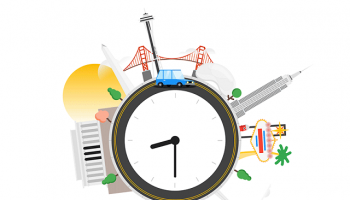 Take control of your commute with Google Maps