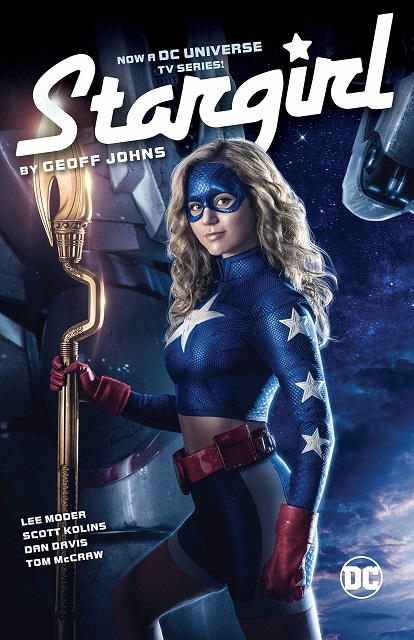 Fans of the widely popular DC Comics typically know the origin stories of the likes of DC superstars like Batman, Superman, and Wonderwoman thanks to their repeated movie iterations and long history in the world of DC Comics. DC Comics is also known for its vast collection of supervillains, like Harley Quinn, Hugo Strange, and Lex Luthor. One DC Comic heroine that has recently come back to the small screen is Stargirl, a CW original created by Geoff Johns. Learn more about the background of Stargirl below.

Stargirl is a superhero that first appeared in the comic Stars and S.T.R.I.P.E in July of 1999, and was created by Geoff Johns and Lee Moder.

Stargirl is the alter ego of high school student Courtney Whitmore. Courtney seems like a typical teenager, as she navigates her mother marrying her new stepfather, Paul Dugan. Courtney is resentful of her mother’s marriage, especially since it forces the family to relocate from Los Angeles to Blue Valley, Nebraska.

After moving in with her stepfather, Courtney finds power gear from the original Star-Spangled Kid, and puts on the costume to displease Paul. She eventually becomes Stargirl, and has excellent kickboxing abilities to accompany her superior strength, speed, and stamina with her Cosmic Converter Belt, and flight thanks to the Cosmic Staff.

Paul is a mechanic at his own car repair garage, and he ends up making his own powersuit called the Special Tactics Robotic Integrated Power Enhance or S.T.R.I.P.E out of old car parts. He accompanies Stargirl on missions to ensure her safety.

Stargirl has been portrayed in live action media three times now, the first of which came in seasons nine and ten of the popular series Smallville. Britt Irvin portrayed Stargirl in the series for a total of three episodes. Stargirl was also played by Sarah Grey in the show Legends of Tomorrow, also for three episodes.

The latest iteration of live action Stargirl arrived in 2020 on the streaming platform DC Universe.

The first season of Stargirl was 13 episodes, and it was met with positive reviews from critics and fans alike. The CW picked up Stargirl and renewed it for a second season that is currently in production. This version of Courtney Whitmore/Stargirl is portrayed by Brec Bessenger, and features an array of other superheroes, such as Wildcat II, Hourman II, Doctor Mid-Nite II, and more.

Aside from introducing the world to young, talented actors, the show has managed to capture many big names as regulars or guest stars. Luke Wilson, for example, plays Courtney’s stepfather Paul Dugan. Notable guest stars include Joel McHale, Lou Ferrigno Jr., and Jim Gaffigan among many others.

Where to Watch ‘Stargirl’

You can currently watch Stargirl on The CW for free or with an HBO Max or YouTube TV subscription. You can also rent episodes of the show for a small fee on YouTube, Google Play, or Apple TV.