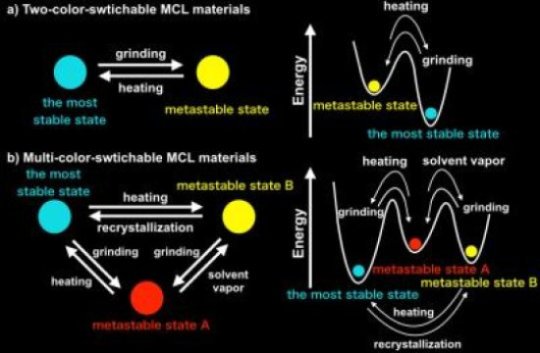 There is no dearth of amazement in the world of science. The news of the existence Mechanochromic Luminescent Materials or commonly known by their abbreviation MCL and are very popular among tech enthusiasts and physicists and even the masses for the simple reason; when these materials come in contact with the presence of certain pressure or temperature, or when there is a shift or change in the atmospheric pressure or temperature, they change their normal colours.

However as commonly known, these materials generally convert to at the very most two colours. Therefore, their application has found its restriction in practical applicability.

But if the latest technology news is anything to be believed, then there has been some serious progressive research going on by the research team which is mainly composed of very good chemists at the Osaka University, which has shown some ridiculously unbelievable results: they have discovered MCL which might be with the capability to change colours thrice!

These developed materials are also gaining more and more popularity for being able to exhibit efficient thermally activated delayed fluorescence, also known as TADF. This has resulted in allowing in the emission of high performance light emitting diodes devices.

The professors are of the opinion that in order to generate MCLs which are of tri-colour or multicolour changing, they require more meta stable states. And in order to maintain these meta stable states, it is imperative to design a completely new molecule which would have the potency to maintain stability. And this is done by application of a conformationally switchable phenothiazine as its donor.

According to the explanation provided by professors Youhei Takeda, one of the researchers and professors associated with the project has already told the media that the reason for their using an acceptor which is unique and promising, that is, the dibenzophenazine or the DBPHZ, it resulted in the creation of a PTZ-DBPHZ-PTZ triad.

In this triad, it was found that the PTZ moiety had the distinct ability to from two very different conformers which in turn could create, as a whole, a total of, four meta stable stages.  Based on the response against the action you are putting it to, be it fuming or enduring heat or even grinding, the molecule sometimes switches colours between yellow, orange and red.

This is all the more a useful innovation because while the OLED devices that we definitively use, has the power to convert high energies. But in order to this their sole dependence lies on precious stones. However, TADF light emitting devices can achieve the same, but at a fraction of the price making them well suited and ideal and can be used in devices like smartphones for better displays.

In fact this new MCL-TADF molecule has higher potential than OLED when it comes to being an emissary materials and hence can maximise conventional fluorescent materials.