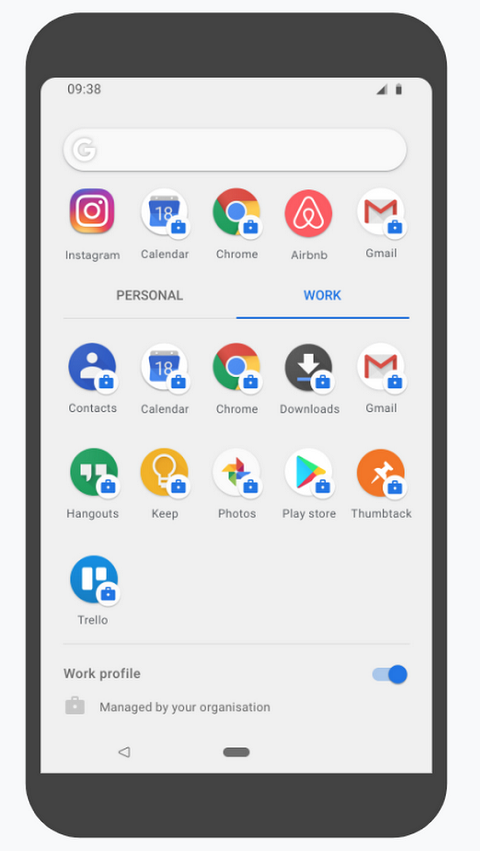 Google recently launched the beta version of Android P. This new OS brings a lot of intelligence and simplicity to the way things are done on phones. The newest launch on Android P also brings in more features that business users will find really useful.

The new version of Android P adds in more security to apps, an easy move mode between work related and personal accounts in apps, the ability to add in certain apps in kiosk mode and apart from these many more. All in all, these features are aimed at making a mobile phone more- friendly for everyday work related scenarios.

The new user interface on Android P has a space dedicated completely to work related apps. The work related apps now come in a dedicated tab in the app launcher which makes them not only more visible but also helps in avoiding duplication of apps and overall clutter on the phone.

These work related apps also come with a designated briefcase icon which goes with the overall look and feel of the interface on Android P. Besides this, Android  also offers users the ability to switch between work related apps and personal apps. At the end of the day it is simply a question of switching off the work mode and for the rest of the day you won’t have to be bothered with notifications or the like from those apps.

Switching between personal and work related accounts on the same apps in Android P:

Many people now have multiple accounts associated with one app- a work related one and a personal one. So to cater to users with such accounts, Android P allows users to seamlessly switch from their work related account to their personal one without the need of going to the app launcher.

Google tasks has already installed the feature on their platform and Google will get more of their apps to support this feature soon.

Shifting between users in Android P:

For phones that will be shared between multiple users, Android P users will now simply be able to log out and hand the phone to the next user without any trouble of their data being seen by the other person.

Businesses use phones for a lot of things some of which are as payment modes, digital signs, information kiosks and otherwise. Previously when using a phone on kiosk mode only one app could be locked onto the screen but now all that has changed with Android .

In Android P , IT admins will now be able to add more apps onto the Kiosk mode and with their own designated launcher. That being said, business customers will not be able to access any other features on the phone such as notifications from other apps.

Developers will not have to build their own launchers anymore too, admins can now make their own customized launcher with the ability to hide features such as the status bar icons, power menus, notifications and navigation buttons.