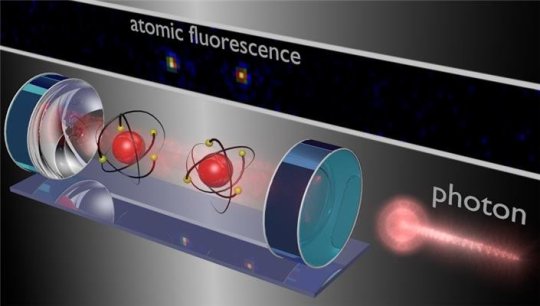 We all dream about a hassle and extremely quick travelling convenience not limited to the just the cities few kilometres apart but oceans apart. Scientists have found that the research in the realm of the quantum physics especially of the quantum computation can help in making such dreams into a reality. Currently efforts are towards creating such large quantum networks which can enable the single light quanta filled with quantum information to be transferred to large distances. If scientists are able to build such quantum networks then it will serve as the fundamental building blocks for creating a highly refined version of such technology allowing for the transmission of information and matter across large distances.

A group of scientists at Max Plank institute of Quantum Optics has come up with a new concept of the quantum gates. Scientist has developed an optical activity in which two atoms were trapped inside and photons were impinged in it to generate an interaction. This particular interaction helped in finding the base characteristics of the gate operations which can be seen easily between the two atoms.

The new method has left every spellbound and also helped in showcasing the advantages of its uniqueness which can certainly in making the longer distance ravel within few seconds a possibility in future.With quantum computation it was found that that the gate mechanism can easily be used as an experimental platform while the two atom gate can be utilized as a building block to act as a quantum repeater.

How this Quantum Computation experiment was conducted?

The major element utilized in the experiment was an asymmetric high-finesse optical resonator which had two mirrors. One was a high reflection mirror while other was the mirror with a finite transmission capability.

Later on in this experiment two electrically neutral rubidium atoms were simply trapped within the centre of the cavity.Now each of the atoms was infused one qubit of quantum information which helps in the quantum computation. In order to open up the gates these single protons are moved through the semi-transparent mirror.

As per the different initial state of the atom it results in different scenarios which aren’t within the control of the scientists. When both the atoms reaches the non-coupling state as shown by the photons then kit enter the cavity and a light is passed through the two mirrors build up to initiate the experiment.

The mechanism which rules the gate operation is quite simple and marvellous as it has just one physical step.This gate mechanism has helped the scientist to travel distance between the qubits of just 2-12 micrometres but with time they will be able to travel a larger distance.

The best thing about this experiment is that it doesn’t rely on any special or specific kind of platform and it can applied on a wide variety of atoms, ions and other solid state quantum dots as well and ushering a new era in the quantum computation.