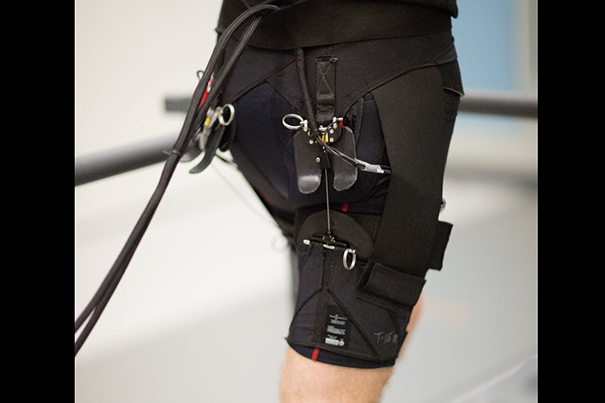 In this modern with the emergence of highly captivating performance tools and apps we have grown highly sceptical about our own performance. Our body is designed to work at certain levels and overreaching it doesn’t usually turns up good results. It isn’t possible to improve upon the average running pace or other workouts without required amount of training over a certain period of time. In order to get over these shackles researchers at Harvard University had come up with a highly sophisticated and futuristic kind of Exosuit.

A Exosuit to power your performance

This robotic exosuit is designed to reduce the metabolic cost on the body to great extent to improve up on the overall performance of a human body. In short it aids in bringing the ideas or dream of high performance right into the reality by simply arming a person with a performance boosting exosuit.

Running is described as a costly form of movement which happens to put huge strain on the body. The new soft robotic exosuit technology designed by researchers brings an ideal platform for the assisted running which can be brought to wider masses in near future. Herein users have to wear an exosuit which is made up of textile. It is extremely lightweight so the body doesn’t bear the additional burden while running around. It comes loaded with flexible wires which connect to the apparel placed at the back of the thigh and an actuation unit is placed in the waist belt. When a person runs wearing then the robotic exosuit jumps into the action aids in running by applying force to the legs at each stride.

Testing and Development of the exosuit

Researchers had tested this suit on two distinctly different assistant profiles as well as the patterns of wire pulling. Their testing was based on two aspects one being the human biology interacting with the applied force and another was simply a simulation of the exoskeleton assisted running.

It was found that when force is applied on the running stride on the person going through the simulation then it happened to outperform the biology based profile to a great extent. The simple reason attributed towards this success was given to the fact that it helped in reducing the metabolic cost by quite a number of factors.

The future prospects of the battery powered exosuit

We are not going to see the emergence of popularity of the battery powered exosuit right at the moment and it might even take quite a while before it is brought to the consumers. Researchers has stated that the technology being used to power the exosuit and to derive better performance out of it is still going through development phase and it will take few more years before it is perfected.  But their study has already shown that in future companies will be able to leverage the experience and expertise of the robotic exosuit to the wearable technology as well as biometrics. It will help in improving upon the human performance wherever required thereby showcasing widest variety of application.