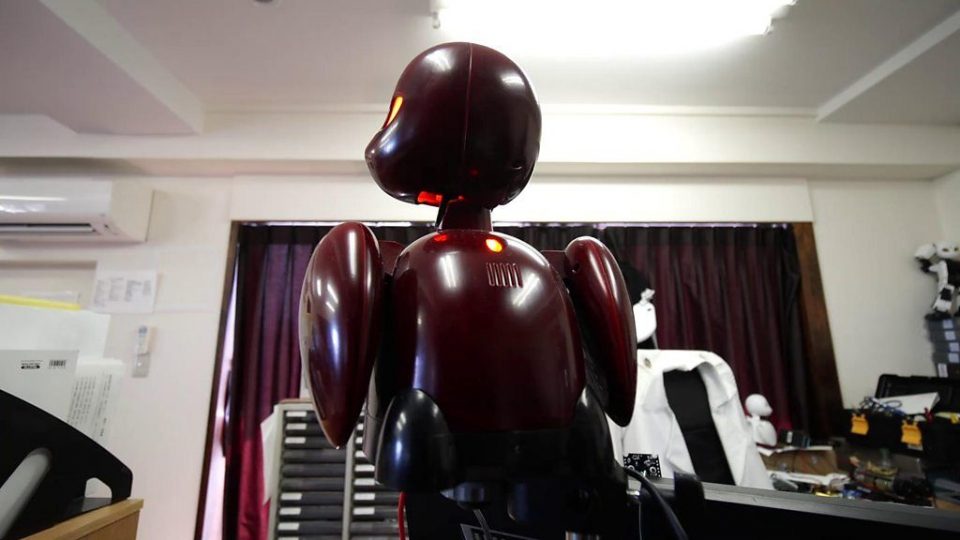 Kentaro Yoshifuji a serial inventor as well as developer of Orihime robot had designed it to support the loneliness he had experienced as a child. A report from Tribune News Services states that over six million elderly people tend to live alone and by 2030 one project had stated that almost 40% of the Japanese people will be living by themselves.  For several people in Japan, loneliness seems to be a regular reality.  However solution is on the way in the form of a new robot.     Yoshifuji has mentioned that from elementary school to middle school for a period of three and a half years owing to stress and illness, he had been at home and for major part could not attend school at all.

He had been mentally as well as physically weak from over-stress and could not bear to meet anyone.  He lagged behind in studies and suffered from feeling of inferiority.  He began distrusting people and was distressed by acute loneliness.

Thereafter he went to an engineering-focused high school and thinking that he preferred to make something useful to people, directed his efforts on designing a wheelchair. His new wheelchair design had won the third place at the Intel International Science and Engineering Fair and his achievement had been put up in the local media. Thereafter his next project was to tackle the issue of loneliness and recalling his own experience he began to work on this issue on Orihime.

Video Chat – Why Lack of Monitor in Orihime

The most essential part, for Yoshiifuji was not connecting human and robot but connecting human and human.  He explained that the reason for him to return to society as he did was due to the support of various people.   He felt encouraged each time someone said `I don’t want you to give up’.

The essential element was human-to-human connections and he was of the belief that no healing can take place without this. Orihime initially sounded identical to a video chat program, enabling communication between people in different places. However as per Yoshifuji, Orihime is a totally different experience from a video chat, with the lack of monitor.

He informed that some people are of the opinion that a monitor is always better as one can see the other person’s face and comprises of plenty of details.  But taking into account when the person operating Orihime is a patient in the hospital, he did not want to show his face where he had been thin and connected to bunch to tubes and did not want anyone to see him that way.

Set of Arms – Heighten the Realism with Orihime

Without the monitor Orihime tends to be helpful in stimulating the visual imagination of the patient as they picture the friends and family surrounding Orihime.  A person can imagine the others’ expression from their voice.  Several of those who seem to spend time interacting with the robot have also remarked on the strange way Orihime begins to look like the real person. Orihime had been created to assist this type of illusion.

While at first glance, the face seemed a bit strange, the design inspired by the mask utilised in traditional Japanese Noh theatre.  This apparently expressionless design is what allows Orihime to take on several faces. The latest upgrade has also added a set of arms to heighten the realism. Yoshifuji has explained that `just a head and torso gives a full sense of a human presence.

But they found that in the research the impression that the robot tends to make on those around it, is completely different with the arms and without it.  He had studied the physical movements utilised in drama and had programmed them in the arms of the robot.

On presenting a series of several movement patterns in the repertoire of Orihime, its array of emotional expression had augmented intensely. The present Orihime tends to perform ten movement patterns including nodding and clapping.  As part of the Jumpstarting Japan series of BBC, meeting the Asian giant’s young entrepreneurs, Mariko Oi had visited Kentaro who presently has been working on a keyboard for those suffering from motor neurone disease ALS.

Operation of Orihime can be Customized

The robot Orihime centres on eradicating this type of isolation though it is not a chat person which would be playing with you and keep one company.  Rather than creating an artificial interaction, the robot Orihime is said to be designed to enable connections between humans.

For instance, consider a child who tends to be hospitalized for a long time and prefers to go to school but is unable to do so.  Orihime can be send at the child’s desk in his place and the child can then utilise a smart device or a PC in controlling Orihime at a distance which come equipped with a microphone, camera and a speaker.  Its head and arms have the potential of being moved through remote control.

If one needs to look towards the right, Orihime can be manipulated by controlling it with the device.  Utilising the device in the hospital room, the child thus has the feeling of chatting with friends.  Besides being aware of the things taking place in the class, it tends to actually participate in it such as answering the teacher where Orihime tends to become an alter ego or avatar.

Orihime can be utilised by amyotrophic lateral sclerosis – ALS patients whose muscles seem to have deteriorated.  These patients often tend to only move their faces to a small degree.  Those with serious cases only tend to move their eyes freely.  The operation of Orihime can be customized and can also be controlled with just the movement of the eyes.  In one instance, a father who had been hospitalized with ALS and had been away from his family was capable of controlling Orihime with his eyes and play with his family and kids. Yoshifuji has described Orihime as a care technology.