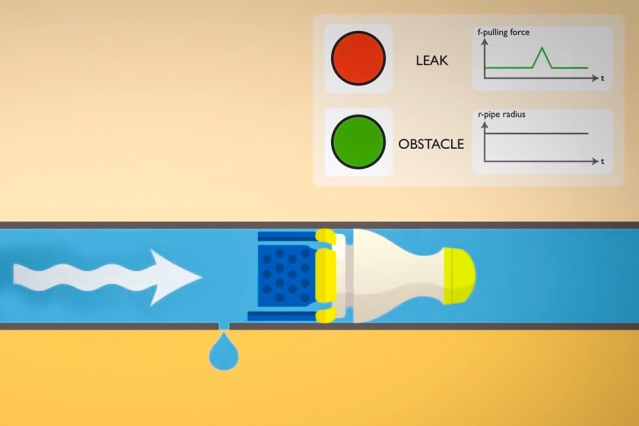 If you have a problem with your water supply then the best option is to call up a plumber and get it fixed. Just assume if a robot does the same for you then it would like living in a science fiction. One of the world’s most pressing needs is to bring access to the clean and safe water. In order to do so researchers has developed a PipeGuard robot, which can do many things to get rid of the leaks in shortest turnaround time.

It has been found in various studies the modern water distribution system on an average loses as much as 20 per cent of its supply due to leaks. Leaks are dangerous as it causes serious damage to the structures such as building as well as roads. Detecting leaking is another major challenge which happens to be quite expensive and time consuming affair this is where this robot comes in.

Researchers at MIT has come up with new system which happens to be extremely fast and relatively inexpensive solution which can effectively detect and find even the tiniest of leaks with pinpoint precision. It can work on any kind of pipes regardless of its make and model. This new system is being commonly seen as a ‘PipeGuard’ but researchers has devoted as much as nine years to develop, test and perfect this system under the leadership of a mechanical engineering professor named Kamal Youcef-Toumi. At the upcoming IEEE/RSJ International Conference on Intelligent Robots and Systems (IROS) in the month of September this team is going to showcase its findings in detail.

How this new system works?

In this new PipeGuard system researcher makes use of a small yet impressive robot made up of rubbery substance which appears to be oversized badminton birdie. This this PipeGuard robotic device is inserted into the water system using the pathway of fire hydrant and it keeps moving as per the flow and continues logging its position throughout the route. It detects leak acts as a PipeGuard through detecting the variation whether small or large made in the pressure at any point of its journey. This data generated through its sensing the pull right at the edges of the rubber skirt and this rubber skirt tends to fill diameter of the pipe which ensures that no space is missed in any case.

Later on this device is collected at another hydrant insertion point and the data collected during its journey is uploaded to the computer for further study. This robotic PipeGuard device doesn’t only rely on the passive movement of the water to travel through the pipe but it also has system in the active version wherein the team can control its motion as per their need. This officially titles as ‘PipeGuard’ and it will be rolled out for commercial usage in such countries which losses huge amount of revenue due to leaks.