Truth to be told TVs are simply boring when they are not in action. We have come a long way from the boxy tube one to flat panels which are available in varied screen dimensions like curved, square and wide. Samsung is taking the innovation forward by not just making televisions bigger and thinner with immense resolution but turning it into something else altogether as Frame TV. In recent past TV has also seen the subsequent rise of the 3D, 4K and curved displays across the price segments which caters the need of very consumer in its own fashion.

The wide range of feature, functionality and innovativeness also has its own shortcoming as it ends up in consuming the consumer. One isn’t sure whether to opt for top of the line model or settle with a budget friendly one. Samsung is going to bridge the gap and bring a new dose of innovativeness with the launch of new Frame TV. 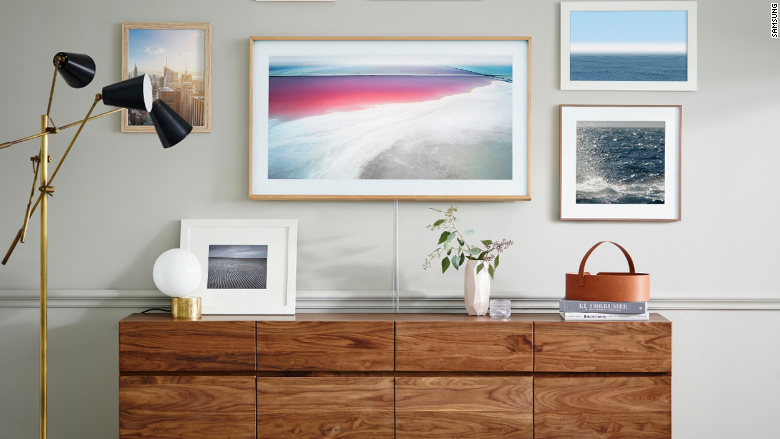 It shouldn’t come as a surprise that the design of the Frame TV will be just like frame as it goes with its name.  It is specifically designed to appear like a frame piece of art which can be hanged on the wall. It is certainly different, new and to be more precise a bold decision coming from the consumer electronics firm. When a turns on the Frame TV it works just like the television but during inactivity it doesn’t appear to be a black square or rectangle on wall gazing upon the homeowners.

In simple words Samsung has designed the Frame TV to blend with the room interiors rather than appearing as a boring and ugly black rectangle.

Frame TV blends flawlessly with the environment which is hard to explain and can only be experienced in person. When the television is turned off then the matter finished screen of the TV comes filled with the art. Korean giant is offering as many as 100 free options which come with some of the coolest abstract patterns to the common stark whites and blacks. Secondly if any users wants to enhance the amount of options then it can be bought from the TV itself at $19.99 apiece or get a chance to experience the complete library by spending just $4.99 a month.  It would be insane to think users will be stuck with the free or paid options only therefore Frame TV allows users to upload their own which will be displayed when TV is turned off.

By default like any other television Frame TV comes with the black edges but it can snapped with white, beige wood or walnut frame in order to match with the home decor. Consumers will have to shell out $200-$250 for additional edges. At first glance Frame TV doesn’t looks like a traditional flat panel TV and Samsung does need a credit for this innovative design. In short, Frame TV as real as a TV when turned on and as real as an art piece when turned off.