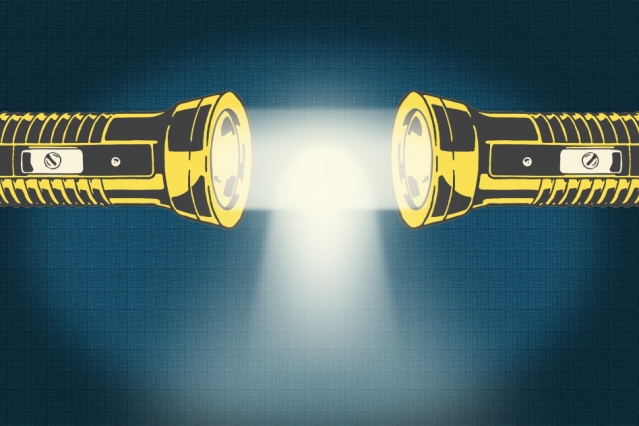 New Form of Light to help in Quantum Computing?

Using light to transfer information is nothing new. Today we see optical fibers being used for just that. But what if light or photons could be used in distributing quantum information in a unique never-seen-before-kind of way? Researchers have found a way to create a new form of light by getting photons to come together and stay together.

Taking a simple example of placing two torches facing one and another with the beams on, you will notice that the light just passes by the other beam without anything interesting happening.

How can these photons be made to interact to create this new form of light?

Researchers shone a very weak beam of light through a cloud of rubidium atoms and discovered that the photons came out in groups of two and three creating a new form of light.

Further observation also noted that photons, that normally travel at the speed of light now became slower and more sluggish than before, the newly combined photons now took on a fraction of an electron’s mass. The newly formed photonic matter now moved at 100,000 times slower than what it did before. If photons could be made to interact in such ways to create a new form of light, then these newly formed photonic matter could be harnessed to perform incredibly complex quantum computations in a very short span of time.

The Experiment in creating a new form of Light:

Getting photons to interact with one and other has been a life long struggle for many scientists but not anymore. In 2013 scientists struggles came to fruition when they were able to combine photons and create a new form of photonic matter or new form of light.

In the experiment, researchers used a cloud of rubidium atoms that they cooled to create a state of immobilized atoms. Researchers then shone a very weak beam of light through the cloud. Measurements after this process yielded a solution that researchers were waiting years for. The photons combined with each other in groups of twos and threes and remained together even after the experiment, creating a new form of matter.

The newly formed photonic matter or new form of light was found have a strong bond meaning that the photons had interacted with the other photons strongly.

Scientists came up with an explanation as to how this was happening. When photons pass through the cloud of rubidium atoms, they land from one atom to the next and while landing on an atom, the photon becomes a polariton which is a hybrid between a photon and a rubidium atom. Two polaritons react with one and other through their atomic component. At reaching the edge of the cloud, the atom component remains back and the newly joined photons leave the cloud, giving a new form of light.