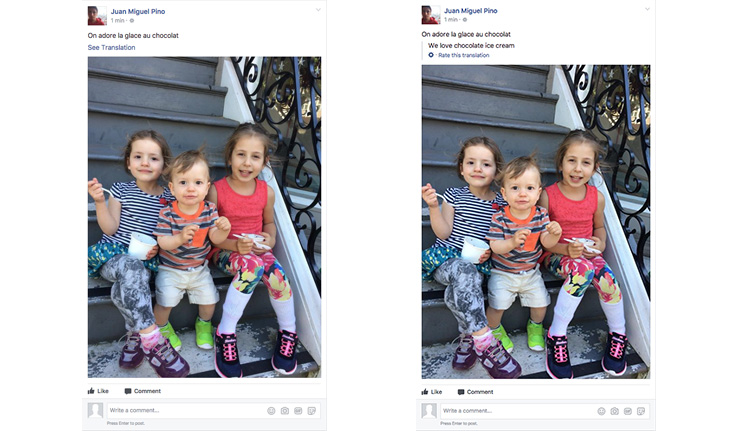 Facebook is known as the world’s widely used social networking platform with more than a billion user base. Over the time it has been found that people are looking at post written in foreign language quite often and Facebook is bringing artificial intelligence backed Facebook translation service to decipher it for the users.It should be notes that Facebook has amassed more than two billion users on global scale and it offers supports to as many 45 popular languages. Facebook has announced that it is embracing the use of the new Facebook translation service in order to aid the users in understanding each other thoughts and posts regardless of the language.

From now on users will get an option to click ‘see translation’ beneath the post or comment in order to translate that text into their own language via Facebook translation. This will be powered by the neural networks which happen to a highly advanced form of the commonplace artificial intelligence. Facebook has formed an artificial intelligence division called Facebook AI Research which in the past couple of years had developed a neural network named CNN (convolutional Neural Network) which helps in offering fast and accurate translation. The best thing about CNN is that it has the ability to look at the groups of words at a time rather looking at single work at a time while translating the text in the native language.

Apart from the CNN Facebook has also made use of another type of neural network named RNN (Recurrent Neural Network) of Facebook translation which has better sense and ability to understand the context of the whole sentences and it can even reorder the sentences in order to make them sensible and intelligent literally.

Facebook has beaten a number of tech companies which were involved in developing new age a Facebook translation service for the masses with its AI powered service. Facebook claims that this new Facebook translation service integrated on the social network platform happens to be 11 percent more accurate that the currently used approaches and methodologies. Researchers and engineers at Facebook terms this ‘phrase based machine translation’ which helps in translating sentences  and by translating small groups of words separately then change the word order of the sentence in order to keep the meaning intact and contextual.