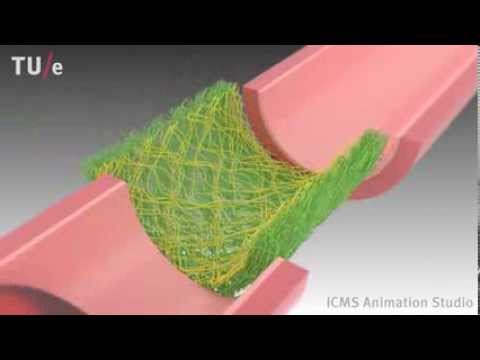 When the human body receives an implant, physical, chemical and biological processes of integration in the receiving organism are triggered. Sometimes, infections, clots, or local tissue loss can occur, and the implant does not perform properly. One of the challenges of BioEngineering is to increase the organism’s tolerance to implant biomaterials and to get the body to accept them quickly.

“If we implant artificial material inside the body, we want to recognize it as his own. One technique of bioengineering for achieving this is to “modify the surface of the biomaterial, as a prosthesis, by placing organic molecules (proteins, peptides or nucleic acids) to improve compatibility with the recipient organism and to become an active element for tissue regeneration or the organ we want to recover.

This BioEngineering technique is biofunctionalized and is based on an empirically observed process: proteins attach to the surface of implants and then some cells that are nearby migrating and bind to those proteins. It is a question of choosing the most suitable ones to attract the cells that interest, that is to say, those that have the capacity to grow and to create diverse tissues (bone, nervous, adipose). The choice clearly determines the outcome.

Indeed, one of the problems is that the proteins degrade over time. The group of Biomaterials, Biomechanics and Tissue Engineering of CREB, to which this researcher is linked, bioengineering studies how to avoid it using only a sufficient amount of protein fragments for the cells to adhere. In this way degradation slows down. The disadvantage is that, without the complete protein, the growth of the adhered cells decreases. Research is now focused on finding protein sequences that do not affect growth.

Sometimes implants fail because they become contaminated with bacteria during surgery. In this area, the BIBITE group studies how to introduce antibiotics or molecules with antimicrobial properties in biomaterials. The team head makes it feasible for these applications to reach the market in the current decade and stresses that this would mean “a significant leap in the quality of life of many people.”

Conventional diagnostic techniques in bioengineering are based on the study of fragments of information; we are committed to an intelligent interpretation of physiological signals that allow us to obtain clinical information that was hidden.

The research group focuses on the advanced processing of biosignals to improve the early diagnosis and monitoring of heart disease, respiratory and sleep disorders, which are often linked.

Collecting more information is important in bioengineering, but the key is to make sense by combining it with other signals of different typologies. “So we get a broader view of the patient’s condition, discover causes and effects, and generate new medical knowledge because we study interrelations that have never been identified before,” says Head of the Research team of bioengineering. Advanced information processing techniques are critical in establishing meaningful connections. Simplification is another result: “A few biosignals can tell us more than many classic parameters,” he says.

The group’s bioengineering researchers work closely with hospital centers. According to the head of the bioengineering research team, “we want to respond to the needs of doctors in their daily tavern; this makes us deal with real cases and thus open the door to possible development of new medical equipment. ” These advances lead to an increase in efficiency, with faster and more accurate diagnosis and the consequent improvement of therapies.

Another socially valuable aspect of these bioengineering new methods is that, on the average, they can lead to a paradigm shift in certain medical procedures.