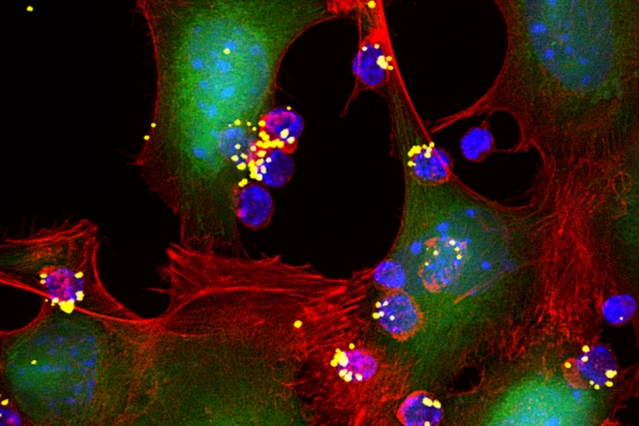 There is great news in the treatment of solid tumors like breast cancer and lung cancer. The researchers from MIT have discovered a way to boost the immune system against these solid tumors. They have discovered nanoparticles ‘backpacks’ that can hold the immune stimulating drugs. They then attach them to the T cells which in turn show a great boost in the T cell activity.

In the past, we have seen great strides in the treatment of blood cancers like leukemia and lymphoma. The immune system of the body has been programmed in such a way, so that it can attack the cancer cells. The researchers faced great challenges when it comes to solid tumors as is seen in breast cancer or lung cancer.

Nanoparticles can boost the immunity against solid tumors

The MIT researchers devised nanoparticles ‘backpacks’ which can hold the immune stimulating drugs. The drugs are then attached to the T cells which would boost the activity of the T cells. The greatest advantage is that there are no harmful side effects. The study was conducted on mice and in more than half of the mice that were treated the tumors completely disappeared.

Darrell Irvine who is a professor of biological engineering and materials science and engineering and also an associate of the MIT’s Koch Institute for Integrative Cancer Research says that the efficacy of the T cells therapy with the ‘backpacked’ drugs greatly improve. It also helps the donor T cells survive and function effectively. They also found that there were no harmful side effects or toxicity that is noticed when there is systemic injection of the drugs.

A company called Torque Biotherapeutics of which Irvine is a co-founder will begin clinical trials adopting this method.

The working of Nanoparticles in destroying solid tumors

In our body there are T cells which are basically specialized immune cells that identify and destroy the infected cells. Cancer researchers have been studying various ways to harness these T cells to destroy tumors by means of adoptive T cell therapy. They need to develop large amount of T cells that will recognize and attack a tumor. They plan to grow large numbers of T cells which are tumor specific and inject them into the patients.

They have discovered two ways of increasing the number of T cells. One way is to remove the tumor-specific T cells from a tumor biopsy, grow them in a lab dish and then inject them into the patient. The other method is to take the T cells from the patient’s blood and genetically modify them so that they can target a protein that is found on the surface of the tumor cell or expose them to tumor proteins with the hope that the T cells will get activated against those proteins.

These methods have been successful in treating lymphomas and leukemias but are ineffective against solid tumors. They have tried injecting immune stimulating drugs called cytokines along with the T cells. The drugs have harmful side-effects like inflammation since they stimulate any T cell they come across.

In 2010, they attached liposomes to the tumor targeting T cells. These liposomes carry a cytokine payload that stimulates the nearby T cells. This was ineffective as the particles could carry a small amount of the drug and it was released as soon as the T cells were introduced in the body.

The researchers then developed a nanoparticles to carry more of the drug and also release it when it encounters a tumor. The nanoparticles consist of a gel made of cytokine IL-15 molecules held together by a cross-link that degrades when the T cell carrying these nanoparticles encounters a tumor and gets activated. There is a chemical change that takes place at the surface. This was conducted in mice and found effective.

Torque Biotherapeutics have been conducting clinical trials and are planning to test them for various types of tumors. They are also looking at drugs besides IL-15 that could be more effective in stimulating the T cells.