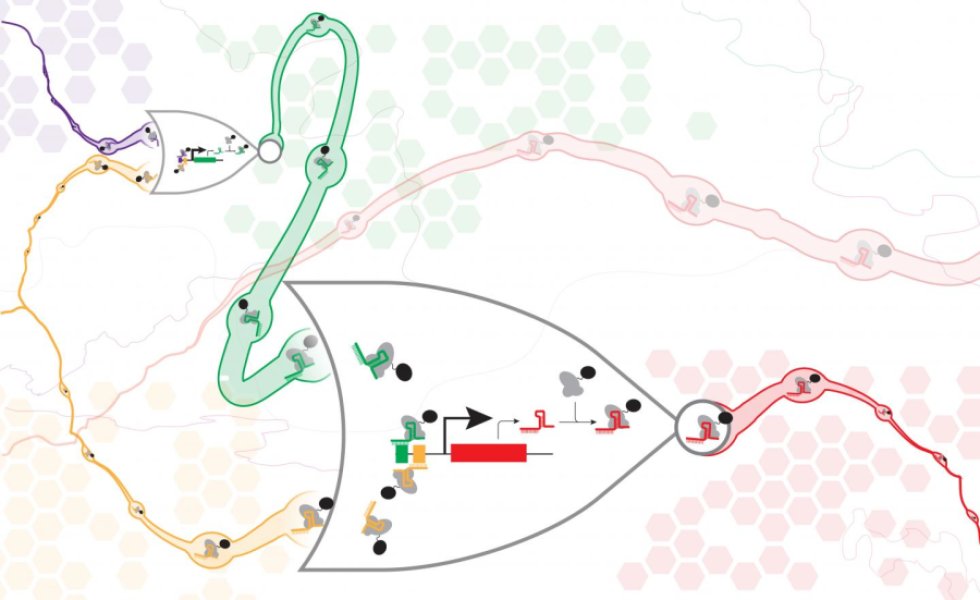 Bioengineers are able to specifically transform the genetic program of cells. In this way they are endowed with new characteristics or abilities that are not so innate but productive. The reprogramming of cells with electric circuits- currently the most dynamic field in synthetic biology – is based mainly on the technological breakthroughs in modern biotechnology.

Genetic methods have been used here for decades to transform microorganisms or cells into living factories for certain natural products, chemicals or pharmaceutical active ingredients. Biotechnologists are here like mechanical engineers, in order to conceive, build and then also continuously check in the cells to tailor-made cells with electric circuits – “production roads”.

While a new biosynthesis pathway is being integrated into a cell in metabolic engineering, some researchers in synthetic biology are pursuing the vision of transforming cells into an intelligent device, which can also be controlled externally through electric circuits. For this purpose, the bioengineers want to develop a catalog with standardized genetic components or switch modules and to assemble them into complex control circuits and electric circuits, which can be specifically controlled.

Their example is electrical engineering, where individual electronic components such as transistors, resistors or capacitors are combined into integrated electric circuits. Such circuits can be standardized and take over so many functions. Intelligent connection of the electric circuits results in complex circuits or even in the construction of living computers.

In fact, bioengineers have a variety of molecular modules at their disposal: genome researchers have already discovered numerous molecular gene switches. With such gene switches – these can be proteins, DNA or RNA molecules – the activity of genes can be precisely controlled.

They can therefore be switched on and off in a controlled manner. Also components of cell communication are always better understood. Optogenetic switches – ie, gene switches that are controlled by light – also offer new scope for controlling the cells in their external behavior.

If such switch modules are linked with other molecular components, then complex control circuits – so-called genetic circuits – can be assembled. The research team of University of Washington are among the pioneers of this approach borrowed from electrical engineering and computer technology. Some notable progress has already been made.

Milestones include a genetic toggle switch, or complex genetic electric circuits that enable cells to process or store binary information like a computer. A catalog with standardized genetic components for bioengineers – the BioBricks – has been developed by UW Researchers.

There are also first application-oriented examples of genetic electric circuits and reprogrammed cells in medicine. Researchers of UW, equip cells with a genetic program that reacts to certain stimuli from the outside and then begins with the production of a substance. This will make the designer cells live measuring station and drugstore in one (to application medicine).