Bionic material has best adhered in a moist and oily environment.
With by means of its fine hairs on the feet – called Spatulae – a gecko keeps itself on electrostatic forces even on very smooth surfaces. In a wet environment, however, this adhesion effect fails. As a model for a new, bionic adhesive material similar to suction cups, which also functions in moisture, Korean researchers have now refined the filigree structure of the suction cups of octopuses. As reported in the “Nature” journal, their suction napkins also adhere well to moist skin and are suitable for novel wound dressings.”Mikrometer small structures in our artificial adhesive material increased the suction effect,” Sangyul Baik and his colleagues from Sungkyunkwan University in Suwon explain the basic principle of adhesion. First, the researchers examined the suction cups of the Common Octopus (Octupus vulgaris) and recognized specific bulges in the small cup-shaped troughs. Thanks to this microstructured suction cups, octopuses can cling to slippery rocks under water, or even their beasts of prey. 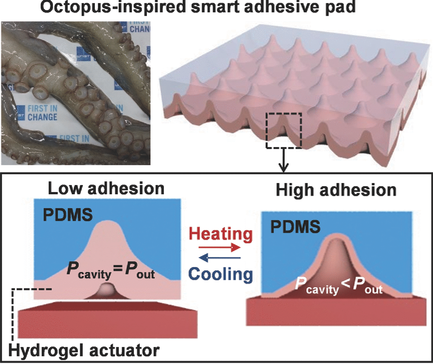 These microstructured suction cups were copied by the material researchers with a flexible plastic film. They first pressed small troughs with diameters between 15 and 500 micrometers into a thin layer of silicone rubber. They filled the liquid precursor of a polyurethane-acrylate polymer and cured it under ultraviolet light in the micropipes – about 5,000 per square meter. In this case small, dome-shaped bulges were formed in the troughs. If the researchers pressed this bionic film onto a damp surface, it reliably sucked in with adhesive forces of over 40 kilopascals. If silicone oil was used instead of water, the adhesive forces even rose to 180 kilopascals.

Baik and colleagues were responsible for this effect. On the one hand, air was pressed out of the troughs by lightly pressing the suction napkin, and a small vacuum was built up. This adhesion was strengthened by capillary forces, which could be formed thanks to the filigree bulges. The greater adhesion in an oily environment, the researchers explained with the higher viscosity of the liquid compared to water. Even several thousand times detached, the suction napkins retained their adhesion effect.

The researchers found the best results with suction cups with a diameter of 50 micrometers. This film adhered reliably even on damp skin. As a first application, Baik proposes new types of patches to cover inflammatory and wetting wounds. But the thin silicon wafers for the production of computer chips could also be lifted out of the reaction baths with this suction napkin. “This approach could be used to move robots, biomedicine or toys,” says Jonathan Wilker from Purdue University in West Lafayette, assessing the Korean results in an accompanying commentary.