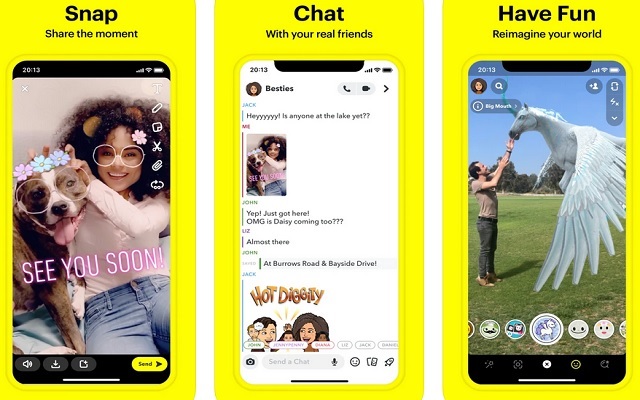 Snapchat is a multimedia messaging app created by Evan Spiegel, Bobby Murphy, and Reggie Brown, former students of Standford University. The app is the most used social media application after Instagram and is quite popular among the younger generation. It has around 275 million active users, and more than four billion snaps are sent every day. The app was basically developed with the basic idea of person-to-person photo sharing; later, all the present features were slowly developed.

Snapchat ++ is the modded version of Snapchat, and it unlocks all the limited features of the original app. The app is one of the most used and trending mod apps in the market. This version is available to both Android and iOS users and is completely free. The app comes with exciting filters and effects, just like Snapchat. In addition, it also has some extra advanced features.

You can directly save the pictures, videos, and boomerang to the device or in the phone’s gallery.

In the original Snapchat, you will have to save the photos and videos manually. Whereas in the modded version, you can enable the auto-saving feature and save the snaps and videos automatically.

Generally, when you view your friends’ snaps or stories, they get notified that you have viewed theirs. But in Snapchat ++, you can mute their stories and view them later without them getting to know about it. First, mute your friends’ stories and close the app. Then, turn off your data and view the story. By doing this, you can see the stories without them knowing it.

Just like the original app, even the modded version has the chat feature where you can send a text or any multimedia to your friends, which they call “Snap.”The app allows you to add friends either from your phone contacts or by searching their user names in the app. The app will later suggest you some friends according to the circle you have at that point.

Every time you view stories, you have to place a finger on the screen to watch the picture. Or else it will move to the following stories quickly; this could make it difficult and irritating to view stories. However, this modded app helps you to overcome the limitation. You can disable the hold gesture setting and then view the stories without any worry.

In the app, you can share any picture or video on any social media platform. In addition, you can also upload saved photos from the gallery directly on the Snapchat Plus Plus.

Like the original, even the modded app allows the stories you upload to stay only for 24 hours. And also, it does not allow taking screenshots. Even if someone does that, it will notify you since security is always a concern.

The app also allows you to add captions to the photos and videos to make the posts look more creative and attractive. The styles and format of the text you put in the captions can be later edited. The paintbrush in the app will help you to draw and write anything on the snaps.

You can protect your photos and videos by setting any password or pattern. The protected media will not be seen in the app gallery as well as the phone gallery. The app’s data will be safe from the third party.

It comes with cloud storage. Therefore, you don’t need to buy any extra external memory if you are running out of storage to store photos and videos.

Any app you download will ask you permission to access the phone’s data. Even the modded version will want you to permit it to work.

The permissions will include:

It is effortless and easy to download the modded version of Snapchat on Android. All you need to do is follow the steps given below.

Snapchat can also be used in Windows Operating System using Android emulators such as Bluestacks.

The modded version of Snapchat is also available for iOS users.

Can you get banned for using Snapchat ++?

Snapchat can ban you from using the modded version of the app since it is considered a violation of the app’s Terms and conditions. Also, the use of Snapchat Plus Plus Apk tries to bypass jailbreak detection. You will have to be careful while using the app. In case if Snapchat gets to know that you are using the modded version, it will ban you right away. Also keep in mind that Snapchat doesn’t have the greatest content moderation on their platform so you’ll want to watch out for inappropriate content.

Does it Exist Still?

Yes, Still it is working.