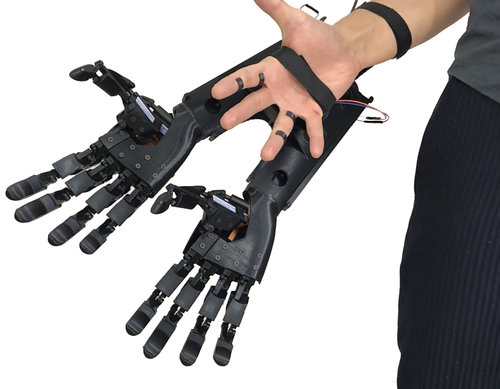 Manual labor is a tough job and if we can get some help whether it is a fully-fledged robot with multiple arms then it would be great. A firm going by the name Youbionic has come up a very unique bionic arm which offers some extraordinary abilities to the wearer. This bionic arm has a very simple and just control wherein users can move fingers can help in opening and closing the fingers to grip anything better. Youbionic has placed small sensors in the fingers area of the contraception which allows users to precisely grip, pinch and left objects by moving their each finger independently.

Youbionic has states that it has taken first constructive steps towards building such devices which can allow human beings to obtain extraordinary abilities and capabilities with the right mix of technology.  Youbionic has become successful in coming up with the first device which simply turns the native human into an augmented human which often seems like human race is evolving something new. The creator of this technology is an Italian designer going by the name Federico Ciccaresse.

Bionic Arm a great device for a new tomorrow

This bionic arm is 3-D printed from the nylon dust. The best thing about 3D printing is that users will be able to print it online by simply downloading its design from online repository and use their 3D printer to create one for their own use. It is worth noting that interested users wouldn’t have to download and print different components of this device separately rather it is designed in a single piece with all the moving components intact thereby allowing users to get it done with a single print. In order to reflect the brain signals in the actual movements of the hands a unique type of microcontroller is being used called Arduino.

YouBionic has stressed that their prosthetics will be made available to the wider audience at a highly reasonable price. The creator of this bionic arm has clarified that there is enough electricity in the muscles which can be utilized while using this device. This device works effectively by reading the impulse sent to the muscle by the brain and translating it into a number to the contraption and in the final stage this message is sent to micro controller.

YouBionic is hopeful that the amputees will be able to benefit from this device by simply updating the software as well as hardware of their limbs which is just like updating any smartphone. The best thing about this bionic arm is that it can even be used a healthy human being as a third limb. A prime example showcasing the benefit of having a third limb will be the astronauts going out on the repair missions on the International Space Station. The future application of this device is simply limitless and very soon we will be seeing human being having the capability of the popular superhero ‘Iron Man’.