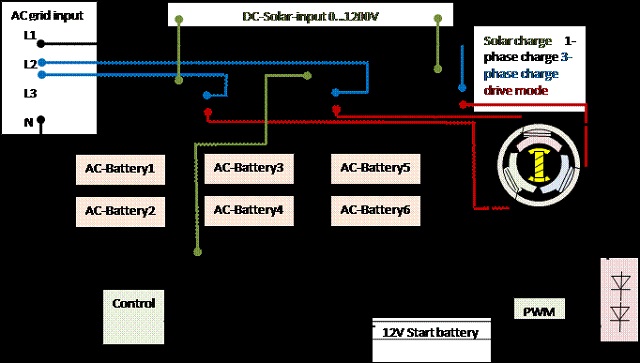 Want to include battery storage in the solar system? If you decide to add, two ways are there you can follow to connect— called AC or DC coupling. These are two voltage types that you can use to transmit and conduct electrical energy. Let us know what is AC battery means?

What is AC Power and AC Battery?

Alternating Current is the standard form of domestic current used. This electrical current is used on the grid, household devices, appliances, etc. It is a special battery equipped with built-in circuitry, like Inverters. The function of built-in circuitry is to convert DC output and offer Alternative Current output. These are used to provide a portable output in remote areas that are far from the main supply.

When you are going to select a suitable battery, it relies on your requirements. These needs can be identified in two main categories that are as follows:-

Most critical systems should have an emergency power source. Due to having a power source offers some time to shut down the running apps so that no data will be lost. The power source is also helpful to avoid loss of control for crucial engineering processes/ medical processes. However, there are some areas where people use small capacity deep discharge batteries.

Equipment that requires high power for a long time usually doesn’t depend on small batteries. In this case, you have to take the help of huge capacity batteries as these stand for a long time.

Different benefits of this type of battery are as follows:

Drawbacks of these batteries are as follows:

It comes with different benefits that are as follows:

Most of the modern off-grid inverters also double as chargers for your deep-cycle battery bank that activate automatically whenever outside AC power is available.

Whether your inverter is not equipped with the feature, it is essential to hook up an alternating current battery charger to your generator. While the natural source is not working, it works as a backup battery charging source.

As the chargers are AC-DC power converters, therefore these are capable of powering DC loads directly even though these aren’t batteries.

What is AC Coupling?

The electrical connection between a solar array and a battery may be Alternating Current or Direct Current. We call current AC when it flows both forward and backward. It is the reason why this type of battery is used in the electricity grid to operate. All businesses and homes use this circuit because of this reason.

However, it is possible to convert direct current to alternating current with the help of an inverter. But during this period, a little energy is lost.

Previously, people used the DC-coupled solar battery systems merely in remote power systems and off-grid homes. But if you see the last ten years, you can find inverter technology getting advanced continuously. It allows the development of new AC coupled energy storage configurations.

Use a solar charge controller or hybrid solar inverter to charge a battery system as these are very efficient ways to use.

Nowadays, battery technology has got plenty of improvements with multiple new lithium battery types. The first-ever ‘high voltage’ DC battery system is Tesla Powerwall. The fame of higher voltage (200-500V) batteries has increased from that time. People use these with specialized hybrid inverters.

Recently, Tesla, Sonnen, Emphase, and other solar manufacturers have developed these batteries.

Why Can AC Not Be Stored In Batteries Like DC?

It is impossible to store these in batteries as it always keeps changing their polarity up to 50 or 60 times in a second. As a result, the terminals of the battery keep changing. It means that the positive terminal becomes negative, and the negative terminal becomes positive. But the battery is unable to change the terminal at a similar speed. It is why it is not possible to store it in Batteries.

provides a steady, controllable current that is capable of covering long distances. On the other hand, Direct current provides a portable and self-contained current with a limited life.

These batteries use direct current, and this type of current flows in a single direction.

In this century came a renewed interest in DC’s potential. Concerns about global warming led to innovations in an effort to

These types of batteries are used in electric cars and help to decrease carbon dioxide emissions. In short words, it is a significant contributor to global warming.

As direct current creates a steady current, it can be quickly depleted. You might be capable of restoring it, but

the power losses significantly in that case. This effect is seen later on in the batteries. These lose power slowly till they don’t stop working.

These are not batteries in reality. Instead, these are converters that generate AC out of DC battery supplies. This type of current flows in two directions. The primary usage of batteries is power distribution. For example, you can use the energy for the electrical outlets in your home. Alternating current is capable of carrying electricity several miles except losing power. You can control this to boost or reduce power with a transformer. Use an alternating current converter on a DC battery to generate a more controllable AC energy source.

The power grid is the most significant if you consider a significant example of DC batteries with AC converters. It is the major source of power for businesses, homes, etc.

These DC batteries come with converters; they can convert direct current to alternating current. Using the converter, you can keep the power even though the supply of AC is interrupted. Homes can use DC battery power also to provide the converted AC power as backup generators.

How solar homes use AC and DC electricity:

Solar panels generate DC electricity, and it flows in a home solar system into a box. We know it as a solar inverter.

Batteries can store direct current and transmit it. You should connect these batteries to an inverter.

Solar battery banks are beneficial for homeowners. These can back up your entire home if any power outage occurs. You can use some batteries also for keeping vital loads up and running.

The solar installer may install special equipment while installing a battery alongside a home solar system. It first makes a connection between solar panels and a charge controller. Then, it will go to a battery bank, a solar inverter, and to the home’s main electrical panel at last. This process is known as DC-coupled battery backup because DC electricity charges & discharges the battery. It is capable of charging batteries as both charge controllers and inverters independently.

There are multiple DC-coupled batteries that you can install and use as AC-coupled systems. You can use this while including a battery-based inverter between the major panel and the battery.

Previously, there was only one type of battery available— DC-coupled batteries. But nowadays, people are looking for a simple way to add battery backup while any power outage happens or you need to power off it.

If you have solar connected with a grid-tie inverter or microinverters, you don’t need a DC-coupled battery as it is of no use. You should not install any new equipment when others are working. Many current solar owners can add AC-coupled battery storage to their solar systems.

When a DC-Coupled system does not come with an inverter, an AC-coupled battery comes with its inverter. It indicates that the generated alternating current output goes directly to the home’s main panel. You can use special wiring to charge it from the grid. It can maintain backup power when the grid goes down.

This article has elaborated details about the AC battery. I hope you will find this helpful.

As this type of current moves in both ways, you cannot store the power directly.

No, it isn’t possible as it changes its polarity.

Alternating current is used heavily when you are going to electric power motors.