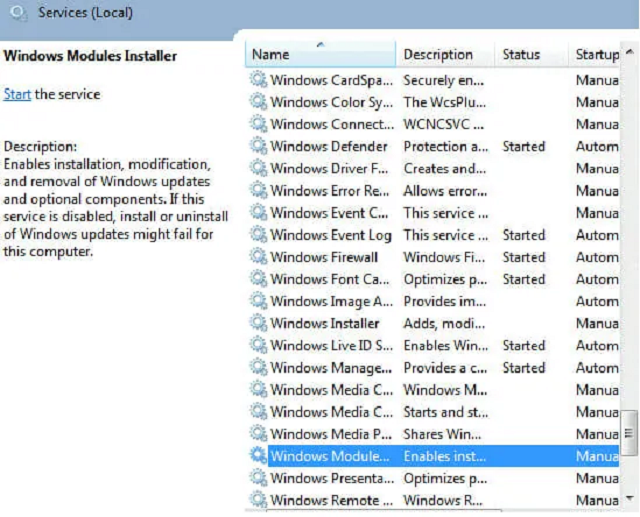 What is Windows Modules Installer Worker? Windows Modules Installer Worker or otherwise called WMIW is an executable program need to execute windows new update available for your computer. This tool is very much necessary for your computer which   running on Windows Operating system. This Windows Update Service automatically running at the background for checking and installing any update available from windows server, for your operating system.

Most of the hardware manufacturers release latest versions and updates for their drivers. Most of the updates are the improvements in the previous or the security fixes. Relatively windows also need to deliver the updates for the systems. Usually Microsoft collects the new version of the hardware drivers, and the Modules Installer Worker down loads them to your computer.

Therefore, all updates comes with some security fixes for the previous versions, new features and other varied improvements. Hence it is very much important to install those updates as early as possible.

Since this WMIW is continuous process some time it pushes the disk usage of your system hundred percent. And this becomes one of the reasons for frequent freezing and hanging of your windows system.

Sometimes the Windows Modules Installer Worker use high CPU use and become vulnerable to your daily use of the system. In that case you can control the high CPU use in the following ways:

The second one is the very easy and safe way to overcome the high CPU use problem.

As told earlier, you can disable automatic update for your windows update. Disabling automatic update stops the WMIW tool and can solve your high usage of CPU issue. To do this, follows the steps below:

A dialogue will appear, select either manual or disabled for the startup type

Click Ok and save the settings and reboot it.

This technique solves the issue in most of the case, if not follow the other methods given below.

You can run the windows update troubleshooter easily from your settings itself to solve the issue with WMIW.

Most of the Microsoft Windows 10 users follow this method. This setting actually not allowing tiworker.exe to consume more Internet usage, hence it stops high usage of the CPU resources.

In the options select the metered connection on.

If it is wired connection do the following:

Set as Metered connection -> On

Schedule the disk check on the subsequent restart and allow it to restart and do the fixing.

Sometimes the disk check will find the corrupt files but it is unable to fix them. Then in that case you need to run the DISM command DISM/Online/Cleanup-image/RestoreHealth to clean the corrupted files and enable the SFC to do the needful.