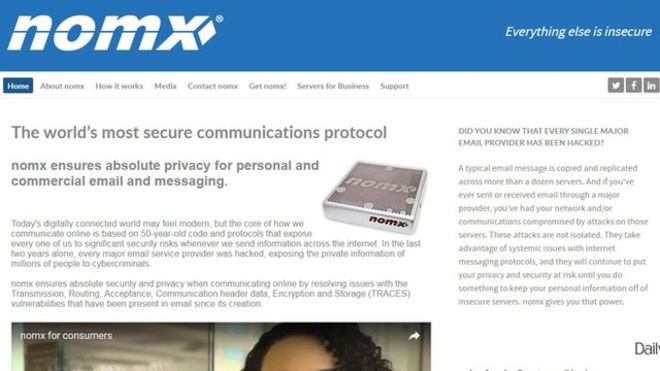 We live such an age where threat to privacy is rising at an alarming level and a number of tech firms and service providers jumped on the wagon bringing the coveted ‘internet security’ to the consumers. BBC has exposed one such email service provider named Nomx who claimed to be world’s most secure email platform. This small personal email server firm has claimed to offer absolute security to the consumers but it failed to live up to the rigid expectation after undergoing a BBC Click investigation.

This email service is created by an entrepreneur named Will Donaldson who popularized his platform as being the most secure communication protocol in the world for safeguarding the email messages. In its defense Nomx has stated that the test conducted to declare its security has been done its very own gadgets.

BBC Click brought on board Scott Helme, a security researcher and Prof Alan Woodward, a computer security expert from the University of Surrey. These men were given the task of analyzing whether the email messages sent over this platform is secure against the rampant hacking, interception and other attacks.

The personal email server is sold at a price of $ 199 to $399 and in all its marketing communication it has been proclaimed that this service is specifically designed to offer highly secure email communication capability to the consumers.

Two major issues were found in the Nomx which includes software packages running on very old version and harboring a massive amount of unpatched security bugs and the presence of low-key default passwords functionality.

choose the updates for internet security

BBC Click investigation findings were welcomes by the Nomx management and they were happy at getting the list of vulnerabilities. Addressing the issue emerging from the use of old software Nomx explained that it will be bringing frequent updates to its platform which will allow users to choose which updates to apply on their device.

Nomx will not be forcing the users to install all the updates as updates are also known to introduce vulnerabilities & limits internet security therefore it will selectively allow users to pick, choose and install updates whenever they are made available.

The default passwords as well as names provided by the Nomx were introduced in a bid to make it easier for the users to set up their device. Users are always encouraged to change them once the device perfectly set up for using the email communication portal.  On other hand security researchers have found the set up process quite complex and they were not asked to change the password or pick a new one at any given point of time.

Nomx has also contested against the finding revealed by the BBC Click investigation by stating that the way device was tested for Nomx is completely unrealistic. Furthermore it was also established that the internet security of the users were never at risk and attack showcased by the security researchers was simply ‘non-existent’ for the Nomx users.