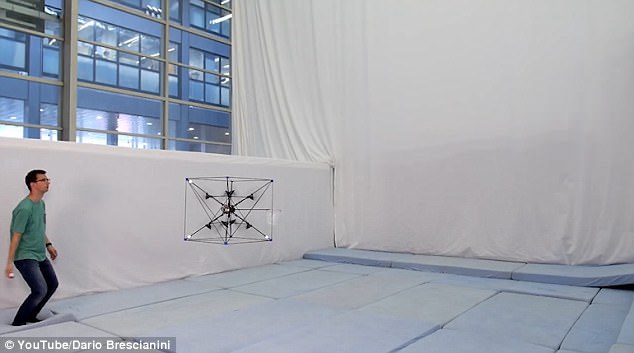 Human beings are omnipresent, so why not a helping hand too? Presenting the mighty omnicopter! Imagine playing catch with a drone? Difficult? Not anymore! This device is not only user friendly, it has huge potential in the developing industries over the world.

The omnicopter is a device that works on similar principles of a drone except that it does not go up or down. Hence it can fly over a wider radius in any direction. It follows airborne objects with accuracy like never seen before.

The device is built with eight motors, pointing in eight different directions, as a result widening the radius of its action. Perhaps one of its most relevant feature is the precision with which it functions. It can measure distances rapidly and follow its function. With its capacity to calculate 500,000 trajectories each second, the precision becomes clearer. At a particular time, the trajectories help the device to guide from a starting state to its final destination. It is like a mathematical competition in itself, reactions and algorithms measure the distance and the trajectory to reach the goal. The algorithms become the basis of selection of the trajectories and its path.

The omnicopter has an external camera, which helps in finding the position of an object. The camera helps in tracing the distance covered by the object and find the correct trajectory with extreme precision. Hence, the trajectories are important.

Drones like Quadrocopters consist of motors in only one plain, restricting its path of travel. This is the advantage of omnicopters over them, they travel in multiple directions. A quadrocopter will be unsuccessful in finding a random object thrown out of its path of trajectory, but the omnicopter can.

After obtaining the object, the Omnicopter device drops it in a direction, where the human can easily catch it. Simplifying jobs yet again!

The application of this Omnicopter is vast. According to researchers, the Omnicopter can travel to areas which cannot be commuted to, hence help in delivering important objects of relevance. That would mean , delivery into areas which require help from another individual, remote lands as well as hi-tech labs. Imagine a situation where you are eagerly waiting for your friend to play catch wit, but your friend cancels on you because of prior appointments. Would you go to bed disappointed, or would you want another companion to play with? There comes this legendary device, the drone will measure the trajectories of the catch ball with way more precision than your friend, something he could never beat.

The Omnicopter will develop more with time, probably one day becoming a device of security in national and international projects. Right now, it is a device of interest in various fields of research studies.