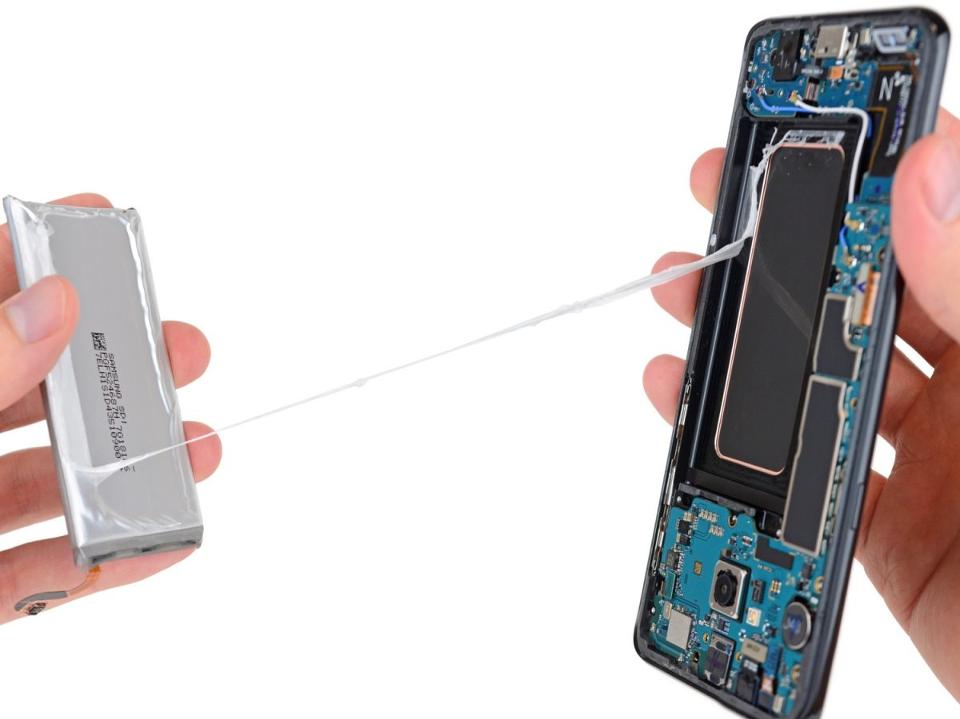 Just a few weeks ago Samsung has unveiled its upcoming range of Galaxy S8 smartphone with great pomp and media success.  The new design language coupled with high end specification and impressive screen to body ratio is winning the hearts of both the Samsung fans and the tech gadgets enthusiasts.

With the launch of Samsung Galaxy S8, this Korean company is eagerly wishing to overcome the loss of faith in its brand with the failure of batteries in the Note 7. iFixit has taken upon the task of checking the internal components of the both Samsung Galaxy S8 and Galaxy 8 Plus to discover whether Samsung has learnt from its earlier mistake.

The surprise for the users

iFixit discovered Samsung has used near identical internal component design for the Galaxy Note 7. The power system present in the Samsung Galaxy S8 Plus is almost like the Note 7 in every way.

The iFixit experts stated the battery voltage, capacity, design tolerances were completely like the Note 7 and quite incidentally the battery preset in the S8 Plus comes from the same manufacture that was responsible for the Note 7 batteries.

This has left everyone confused and baffled as why Samsung would go with same design language and battery manufacturer after facing huge backlash on global scale with the failure of its Note 7 last year.

The journey and launch of the Samsung Galaxy S8 and S8 Plus has gone through some difficult times as it was postponed once when everyone was expecting to be revealed at Mobile World Congress 2017.

The reason behind holding the launch of gadgets at MWC is given to the fact that Samsung was waiting for the final report on the Note 7 battery issues. It is interesting to note that Samsung has given same capacity of battery on Galaxy S8 Plus as it was found in the Note 7. On other hand the Galaxy S8 battery is quite smaller at just 3000 mAh but it happens way ahead of the batteries present on current models of iPhone.

Samsung has taken huge steps in ensuring that the battery problems seen in the Note 7 is completely resolved. To that effect it has also conducted a thorough investigation into the Note 7 battery issue and later on it brought a report which clarified the exact reason which led to the exploding of the batteries in Note 7.

Samsung Galaxy Note 8 Plus has the exact battery compartment as well as battery comes from the same manufacturer as it was for the Note 7 but Samsung has tweaked the internal things a little.

Samsung has brought the modular design language for the internal components. This time Samsung gadgets in form of the smartphone are featuring an extensive use of the glue in the S8 and S8 Plus. This is a great thing for the users but it will become a tricky for the third party smartphone repairing firms like iFixit to deal with.