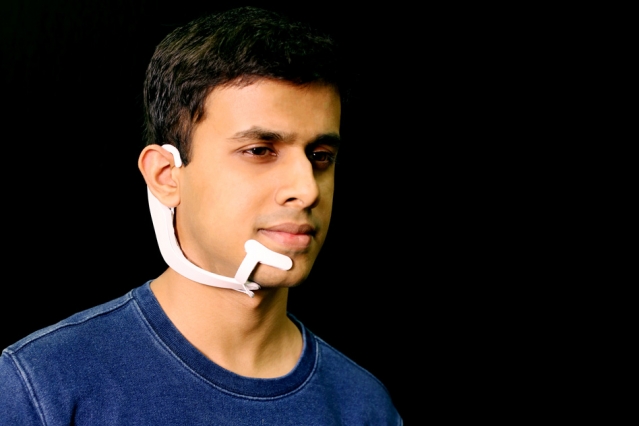 We have all heard of a transcriber and may be even have used it in our work. Researchers have now come up with a computer interface that you wear across your jaw and your ear that translates commands to a computer without the need for actually voicing out the words, while in a transcriber you have to clearly enunciate each word while it is being recorded and written down. Here in the AlertEgo project, the computer uses neural networking to make out words that are not really spoken.

AlertEgo is a revolutionary like device that would have a host of applications. Just think noisy places where you would like to communicate something to someone or issue commands to a computer but really can’t. The entire AlertEgo project comprises of a wearable device and a computer system to analyze the subtle movements of the jaw to come up with the words the user is trying to communicate.

AlertEgo is a project that consists of a wearable device as well as a computer interface that as a whole forms a wordless transcriber. Without actually mouthing the words or without any speech, the wearable device will pass on the subtle movements in the jaw to a computer interface that then uses neural technology to understand the slight/ barely seen movements into actual words.

These signals are then passed on to a machine learning system that then correlates these signals to a list of words to complete the transcription.

The wearable device in the AlertEgo project also contains bone-conduction headphones that transmits vibrations from the bones of the face to the inner ear and since the wearable device does not contain anything in its design that obstructs the ear canal, the device is able to send signals to the user without interrupting them.

Therefore AlertEgo is a complete computational system that allows the user to not only communicate things to a computer but to also receive information from the system itself.

Uses of the AlertEgo project:

AlertEgo is a system that will find a place anywhere, it just takes a little creative thought. In places where you are in a discussion and you need to verify facts but don’t want to pull out your phone so as not to distract the speaker or you are not allowed to, in such cases AlertEgo comes to the rescue.

Think of those high noise environments where you need to communicate something to someone but are not really able to, like the ground work of an airport, again its AlertEgo to the rescue. Another possible use for this device is during special ops where silence is a must, Alert Ego can then be used by special ops personnel where hand signals and actual speech cannot be used.