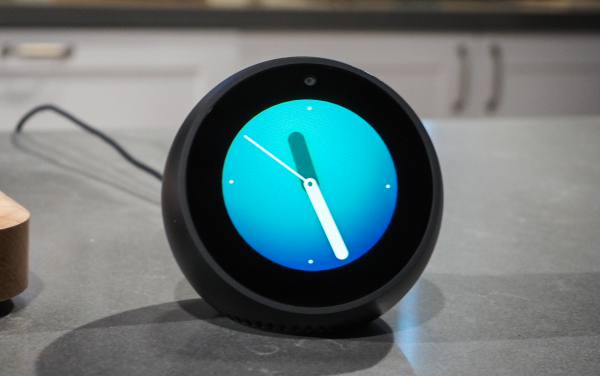 Echo Spot is the new smart desktop clock from Amazon

Amazon is presenting a good handful of news this afternoon in Seattle at an event that was unknown until today. After renewing the range Echo, now presents a smart clock for the night table – or any other table that is provided – through which to make video calls, check the time and perform various functions of home automation through Alexa, the virtual assistant of the company.

The Echo Spot comes with a 2.5-inch screen and an included camera, plus speakers and the possibility of being paired with Bluetooth to other playback devices if you want to get better audio quality. It will be available, for the moment, in the United States for a price of 130 dollars, although we hope that it will spread soon to more countries.

This is perhaps not the most attractive product than it has presented today, since the struggle to take a portion of the market is in the field of intelligent speakers, but certainly is interesting from the point of view of user.

Amazon presents a new Echo to toughen the competition against Google and Apple.

The company of Jeff Bezos celebrates today a surprise event for the press in its offices, in which they hoped to see announced new products, as it has been. Amazon announces a new Echo, its most popular speaker, which will now be improved with the aim of being better competition for the counterparts of the great technology that are already or will soon be in the market, namely: Google Home or HomePod Apple, which will arrive in December.

This new Echo is smaller and includes a dedicated speaker for the bass, making it much better to listen to music, one of the aspects that focuses more on the Apple speaker. It will be commanded, as it could not be otherwise, by the virtual assistant of the company Alexa and will hit the market today with a price of 99 euros, which is a hard thrust for Apple, whose price is more than triple.

Besides this, Amazon offers for the first time a service of multiple speakers, so that they can be connected to each other in different rooms, which will also compete with Sonos. This system, consisting of three loudspeakers, has a reduction of 50 euros on the total price of the three individual devices.

Amazon has now endowed the Echo with a cloth lining that makes it look less like a technological product, allowing it to draw less attention and make it more stylish to the eye.

In addition to the Amazon Echo renovation, they also feature a Plus model that is not only bigger but also smarter. This model includes a smart hub in its interior, so that it can make use of more characteristics typical of home automation. A good example of this is that it comes with a Philips Hue bulb included and already has more than 100 employees. Its price, 150 euros.